GRNews
GreekReporter.comGreeceThe Archaeological Site of Akrotiri in Santorini to Reopen

The Archaeological Site of Akrotiri in Santorini to Reopen 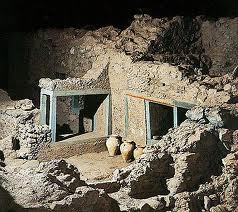 The archaeological site of Akrotiri on the island of Santorini will reopen its gates to the public after remaining closed for almost seven years.
In 2005, a roof in the prehistoric settlement collapsed, killing a male tourist and injuring another six people. After several years of restoration work at the site, the roof has been replaced and the site will open this week.
The Minoan Bronze Age settlement is named after a modern Greek village situated on a hill nearby. The name of the site in antiquity is unknown.
According to the Greek Ministry of Culture, the first habitation at the site dates from the Late Neolithic times (at least the 4th millenium B.C.). During the Early Bronze Age (3rd millenium B.C.), a sizeable settlement was founded and in the Middle and early Late Bronze Age (ca. 20th-17th centuries B.C.) it was extended and gradually developed into one of the main urban centres and ports of the Aegean.
The large extent of the settlement (ca. 20 hectares), the elaborate drainage system, the sophisticated multi-story buildings with magnificent wall-paintings, furniture and vessels, show its great development and prosperity.
The various imported objects found in the buildings indicate the wide network of its external relations. Akrotiri was in contact with Crete but also communicated with the Greek Mainland, the Dodecanese, Cyprus, Syria and Egypt.
The town’s life came to an abrupt end in the last quarter of the 17th century B.C. when the inhabitants were obliged to abandon it as a result of severe earthquakes. The eruption followed. The volcanic materials covered the entire island and the town itself. These materials, however, have protected the buildings and their contents, like is done in Pompeii.