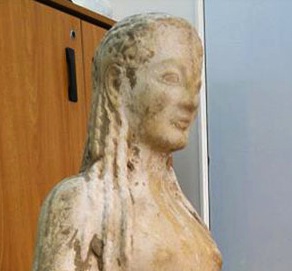 Faced with massive public debt, Greece is finding that its fabled antiquity heritage is proving a growing burden — with licensed digs postponed, illegal ones proliferating, museum staff trimmed and valuable pieces stolen.
“Greece’s historic remains have become our curse,” whispered an archaeologist at a recent media event organized to protest spending cuts imposed on the country for the past two years as a condition for European Union and International Monetary Fund loans.
With Greece moving into a fifth year of recession, licensed archaeology digs are finding it harder to obtain public funds while antiquity smuggling is on the rise, archaeologists warned at the meeting.
“There are an increasing number of illegal digs near archaeological sites,” said Despina Koutsoumba, head of the association of Greek archaeologists.
“Some of them are excavated by semi-professionals who work for art trafficking networks. Others are done by treasure hunters,” she told AFP.
Last month, Greek police arrested 44 people and recovered thousands of ancient coins and numerous Byzantine icons after smashing a large antiquity smuggling ring in northern Greece.
In October, another gang was arrested in possession of Macedonian golden grave offerings from the 6th century B.C. which were valued at some 11.3 million euros (US $14.8 million).
Better In The Soil
Some senior archaeologists have argued that given the lack of funds for archaeological research, it would be wiser to rebury valuable discoveries to better protect them.
“Let us leave our antiquities in the soil, to be found by archaeologists in A.D. 10,000, when Greeks and their politicians will perhaps show more respect to their history,” Michalis Tiverios, a professor of archaeology at Thessaloniki’s Aristotelio University, told Ta Nea daily in early March.
For now, the penury seems to have spared the work of foreign archaeology schools which have helped bring to light some of the country’s most important sites from the late 19th century onwards. But even here, creative accounting is sometimes called for.
Resources Badly Stretched to Nonexistent
“The Greek state is obliged to provide a certain share of financing for each excavation,” said a foreign school representative, speaking on condition of anonymity. “But as there’s no more money available, we put in our budget calculations that use state facilities such as storage areas or lots,” he said.
Greek archaeologists said that funding for the country’s archaeological service fell by 35 percent to 12 million euros (US$15.7 million) last year, and will be further reduced this year. One out of 10 culture ministry employees has been dismissed, and 3,500 temporary staff brought in to allow museums, sites and excavations to operate Greece’s financial difficulties; staff shortages did not take long to attract unwanted attention. In January, a unique Picasso and two other artworks were stolen from the Athens National Gallery during a staff strike.
A month later, two armed men stole over 70 objects from a museum in ancient Olympia, birthplace of the ancient Olympic Games. Out of 106 archaeological and Byzantine museums, 250 organized archaeological sites and another 19,000 known locations of importance, only a handful have been spared the ravages of the Greek debt crisis, archaeologists say. Alongside the Acropolis in Athens, Greece’s top site where EU-financed restoration has continued for decades, including the Minoan palace complex of Knossos on Crete, the sanctuaries of Delphi, Olympia and Vergina, and the Necropolis of ancient Macedonian Kings. But elsewhere, resources are badly stretched to nonexistent. The national archaeological museum in Athens and the museum of Byzantine art in Thessaloniki routinely shut down entire halls because of shortage of guards. The American School of Classical Studies in Corinth has maintained an excavation for more than a century, and closes at 3 pm because of staff shortages. On the Dodecanese islands in the Aegean Sea, where important artifacts dating to the Neolithic period have been found, has museums that will stay closed until May when the heavy tourist season gets underway. “If they’re not open to the public, they’re storehouses, not museums,” said Dimitra Koutsoumba, the Archaeologist Association Chief.
(Source: AFP)