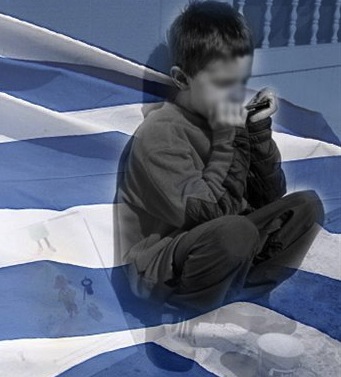 The recent UNICEF report “Children in Greece 2012” describes the consequences of the financial crisis for Greek children as extremely disappointing.
The released data shows that children living below the poverty level amounts to 439,000, and the child poverty rate is estimated at 23%. For the rest of Europe, the same percentage is 20.5.
Given that the report is based on Eurostat data for 2010 – among other sources – the above figures are likely to have altered so that the actual situation could be much more deteriorated.
According to the report, children in Greece of 2012 have become a minority in a population that keeps getting older.
The population of children in Greece has declined from 32% of the overall population in 1961 to 19% in 2001 and 17.4% in 2011 as estimated. Households in Greece have been reduced by one member after 1960. The 3.78 members in 1961 became 2.65 members per household in 2009. During 1991-2001, the amount of households without children under 15 years old increased by 27.5%.
The report also reveals that:
1. Single-parent households are more affected by poverty
2. Bulgaria presents the biggest percentage of child poverty (26.8%), and Denmark the smallest (10.9%) according to Eurostat data for 2010.
3. Underage people in Greece living below poverty level amounts to 439,0000 (Eurostat 2010).
4. 20.1% of households are living in or below poverty level, while 33.4% of them are single-parents.
5. 28.7% of households in 2010 with children were living in poverty or social exclusion. The same figure for households having children between 12-17 years old is much bigger according Eurostat (34.7%).
According to data of the Advocate of Citizen regarding child work, it is estimated that underage working children in Greece are more than 100,000.