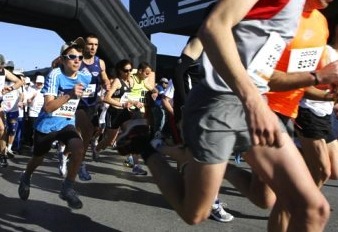 The 7th International Alexander the Great Marathon was held in northern Greece on Sunday, with Teklu Geto Metaferia from Ethiopia placing first, finishing the 42.195 kilometer course in 2 hours, 18 minutes and 44 seconds.
The Marathon, which sets off from Pella, birthplace of Alexander the Great, and finishes near the White Tower in Thessaloniki, the last capital of Ancient Macedonia, was first held in 2006.
The Alexander the Great Marathon received IAAF Bronze Label Road Race status in 2010, and is an AIMS (Association of International Marathon and Distance Races) certified race.
In addition to the Marathon, the day’s events include 5km and 10km ‘fun run’ road races, as well as a 1,000 meter (1km) charity run for primary school pupils.
Second place in the Marathon was won by Dimitrios Tsiounis of Greece with a time of 2:36:38, and third place by Antonis Papadimitriou of Greece with 2:38:28, while the first woman to cross the finish line was Alina Nituleasa from Romania (12th in overall standing) with 2:56:33.
(source: ana-mpa)