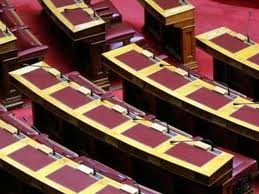 Former Minister and Nea Dimokratia MP from the Prefecture of Achaea, Yiannis Vasiliadis, passed away today at the age of 88.
Vasiliadis was born in Aigio in 1924 and graduated from the Hellenic Naval Academy.
During the junta regime, Vasiliadis joined the Naval Movement at the grade of a Commander. He retired from the Hellenic Navy as a naval admiral. After his retirement and during the political changeover in Greece, Vasiliadis served as the secretary general for the Ministry of Maritime Affairs.
He was elected to MP for the first time in 1985 on the Nea Dimokratia State ticket. Afterwards, he ran as a Nea Dimokratia candidate in the Prefecture of Achaea and was elected MP in the elections of 1989 and 1990. Vasiliadis served as the deputy National Defense Minister with the government of July 1989 and as the Minister of Citizen Protection from April 1990 until 1991.