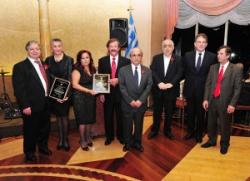 The 106-year anniversary of creative presence among expatriated Greeks, and valuable help to the Lemnians of America and their island, Lemnos, was celebrated by members of the Pan-Lemnian Philanthropic Association Hephaestus, and the Ladies Auxiliary “Maroula” during their annual ball in New York

The charitably active couple Ioannis and Heleni Psarra, who come from Lemnos, and the Vice-president of Marathon Bank, Zoe Koutsoupaki, were the honored personalities of the ceremony.

Hephaestus is one of the oldest associations in the USA and its members have supported their island financially with fundraising, according to an article of greeksonline.com. They have contributed to the establishment and equipment of Lemnos Hospital, they have offered valuable financial help to elementary schools and other municipal projects.

“Their example inspires us all” Georgios Heliopoulos pointed out, General Consul Of Greece in New York , and he thanked them for their constant presence on the side of the expatriated Greeks.

Two scholarships offered annually by the editor of the “National Preacher” were granted to the students Konstantinos Kalogiannis and Georgios Sourelos in memory of Hercules Diamataris. The student Nikolaos Sourelos also received a scholarship in memory of Georgios and Sophia Valiotis by the couple Eystathios and Stamatiki Valiotis.