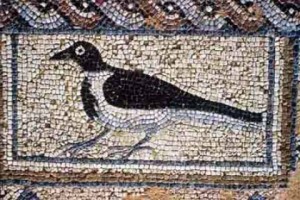 (Original Story in Greek By Inga Athanasiadou)
A 5th Century Christian Basilica was discovered at Livanates Beach near Lamia of Greece, after a heavy rainfall had revealed a small part of mosaic floor belonging to the Christian Basilica.
The discovery is a very interesting religious construction, depicting colorful geometric drawings and beautiful renderings of animals’ figures.
Moreover, the inscription on the Basilica, (ΥΠΕΡ EYXHC ΚΕ CΩΤΗΡΙΑC… /ΕΑΥΤΟΥ ΚΕ ΠΑΝΤΟC ΤΟΥ ΟΙΚΟΥ [ΑΥΤΟΥ]… / Ο ΘΑΥΜ (ΑCΙΩΤΑΤΟC) ΕΚ ΘΕΜΕΛΙΩΝ EKTICEN) written in the Greek language,  indicates that it is a Christian Basilica dating back to the 5th century.
The head of the excavations conducted by the 24th Ephorate of Byzantine Antiquities is the archaeologist Georgios Kakavas.
The excavations that started in 2009 unearthed colorful mosaic floors on a daily basis, while the collapse of the Basilica was found to be due to a high-magnitude earthquake in 551 A.D.