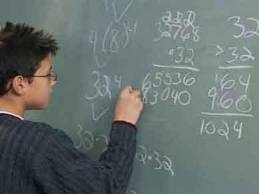 They are only high school students, yet they are considered to be “mathematical geniuses”.  They really are wonder kids in mathematics. The students participated in a contest annually organized by the Greek Mathematical Society and yesterday at noon they received their awards during a special ceremony in the University of Athens.
Last Saturday, the 3rd of March, 2012, the Greek Mathematical Society organized the 29th National Mathematical Olympiad, “Archimedes”, in which 450 high school students from across Greece participated. Those students were chosen after two consecutive Panhellenic mathematical contests.
“These contests have turned into annual institutions” comments the Greek Mathematical Society. “The participation of thousands of students is an indicator of the great interest they show for the science of mathematics. It also proves the good values and the character of our young generation. We should be fond and proud of their excellent abilities and make certain that our country does not only have a brilliant history in sciences and arts, but also a bright present and an even brighter future.”
The Minister of Education, A. Diamantopoulou, the Dean of the University of Athens, Theodosis Pelegrinis, representatives of the Greek Mathematical Society attended – among others – the ceremony.
(story by Helena Apostolaki)