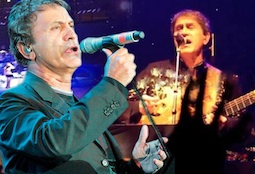 Singer George Dalaras was on the receiving end of verbal abuse as well as bottles of water, coffee cups and yogurt during a concert on Monday night.
Billed as a solidarity concert, the admission-free event took place at Ilion, western Athens.
Dalaras, a UNHCR Goodwill Ambassador, remained on stage as members of the audience shouted “traitor” and threw various objects in his direction.
The crowd is mostly outraged with the fact that Dalaras’ wife, Anna, is a PASOK deputy and former deputy employment minister during the Papandreou government which supported the Greek bailout packages.
“I’m here because I want to be, and because I believe that actions speak louder than words,” Dalaras said at the end of the concert.
The artist is a veteran performer whose songs are mostly connected with the left. In a recent interview on Greek TV Dalaras said that he does not agree with the bailout packages but that there is no other solution for Greece at this stage.
Watch the video to see what happened during the concert:
[youtube]5obdG0p5mTo[/youtube]