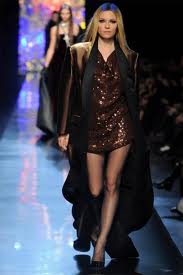 The French designer presented his new collection for autumn-winter season of 2012-2013.

Vicky Kaya told ‘Espresso’ Greek newspaper: “I am very happy to be in Paris and participating in Jean Paul Gaultier’s show. I also had the opportunity to meet up again with old friends. Moreover, I met talented girls who are just starting their careers and gave them my advice.”

Vicky Kaya has been modeling since the age of 14. She was spotted in the street, and from there embarked on one of the most successful careers in the fashion world, appearing in many catalogue bookings, campaigns, magazines and television commercials worldwide. At age 18 she moved to Paris where her career took off. She also worked in Milan, Germany and London. Her appearances have been diverse, from the catwalk to television acting. For the past few years she had been based in New York City and was represented by Wilhelmina Models in New York.

Over the years she has worked with a plethora of leading designers; she has walked for the greatest designers, has shot hundreds of magazine covers, and has been interviewed by top magazines too (Vogue, Elle, Cosmopolitan, Marie Claire, Wallpaper, Instyle, Dutch, Nylon, Tatler, Harpers and Queen, Red, Madame Figaro, L’Officiel, Esquire etc.)

In recent years, Vicky has represented a number of companies in major TV campaigns in the USA, Europe and Greece.

In Greece, Vicky has top contracts with Lancia (Greece), Nivea Greece (Beiersdorf Hellas) and Vodafone Greece, and is their main campaign spokesperson. In May 2007, Vicky became the spokeswoman for the famous Italian car company Lancia for two consecutive years in Greece.

The entry of Cyprus for the 2021 Eurovision song contest has sparked wide controversy among ultra-conservative Christian groups on the Mediterranean island.
Ancient Greece

The Greek word "kosmetika" is the root of the English word ‘cosmetics.’ The word also meant any product that protected the hair and face.
Europe