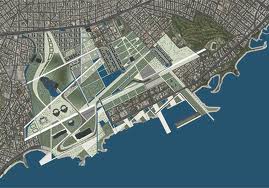 Greece’s environment, energy and climate change ministry tabled a draft bill in Parliament on Thursday regarding the ‘Helios’ solar power programme, regulation of bio-fuels and exploitation of the site of the former airport at Helliniko.
The bill outlines the terms for building and the acceptable uses of land at the Helliniko site, and converts the expanse to a metropolitan recreational park that also incorporates the coastal zone at Agios Kosmas.
It envisions that open public green spaces will make up 40 percent of the site, private open green spaces another 20 percent, while another 20 percent is set aside for construction and a further 20 percent for roads. The park must cover an expanse of at least 200 hectares, and the town planning rules allow the construction of high-rise buildings.
According to the ministry, the draft bill seeks to use the land in ways that serve and promote developmental, financial and social targets, such as attracting investment, creating new jobs, and boosting the city’s international prestige and appeal, especially as a tourist destination.
“Especially in the sector of tourism, by exploiting the advantages of the Attica basin climate, the new pole of attraction can redefine Athens as a year-round tourism destination. This will result in an increase in jobs and turnover for many service sectors in many areas of Athens,” a ministry announcement said.
The ‘Helios’ programme for the installation of photovoltaic panels in Greece and the export of solar power to other European countries calls for the installation of up to 10 GigaWatts of photovoltaic power generators and greater links between the electricity grids of Greece and other countries in Europe.
(Source: AMNA)