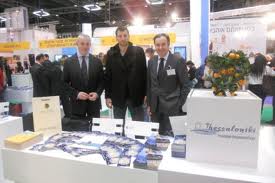 Overnight stays of Israeli tourists in the hotels of Thessaloniki have increased fivefold in 2011, reaching 59,000, while estimates for 2011 expect a further rise.

The fact indicates the warming up of bilateral relations between Israel and the Greek port city, which was also called “second Jerusalem” because of its increased Jewish presence over the centuries.

The President of the Council Board of the Union of Hotel owners of Thessaloniki, Mr. Aristotelis Thomopoulos, who had represented the Union in the International Mediterranean Tourism Market 2012, on February 14-14, in Tel-Aviv, commented positively on the development of stronger cooperation ties between Thessaloniki and Israel

The Union joined the Market along with the Greek National Tourism Organization (GNTO), and was the first to notice the rising interest of Israeli tourist entrepreneurs in including Thessaloniki in their top European destinations charts.

Israeli media visited the Greek stand in the International Market, while Maccabi Tel Aviv basketball player from Greece, Thodoris Papalucas, surprised the visitors of the stand by signing autographs to his fans.

Recent excavations undertaken by the Ephorate of Antiquities of Lesvos  have revealed new Byzantine structures and baths dating back to the Ottoman era.