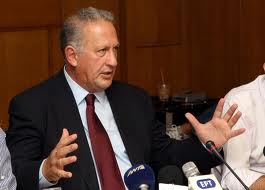 The Greek Agricultural Development and Food Minister Kostas Skandalidis is paying a four-day formal visit to Moscow since Sunday, in order to promote Greek agricultural products in the Russian market.

Skandalidis visited on Monday the opening of Moscow’s international exhibition ProdExport, which was attended by more than 30 Greek representatives. According to AMNA Moscow, the Greek Exports Promotion Organisation also has a big exhibition pavilion.

The Greek Minister held talks with his Russian counterpart, Jelena Skrinik, on strengthening the agricultural cooperation between the two countries and on increasing Greek exports to Russia, which provides an expanded market that Greece could benefit from.

Greek News Agenda reported that Skandalidis has also announced the establishment of a Greek-Russian working group on agriculture, and the decision to promote the “Mediterranean diet” during the Sochi 2014 Olympic Winter Games, within the “Year of Greece in Russia” and “Year of Russia in Greece” celebrations scheduled for 2014.