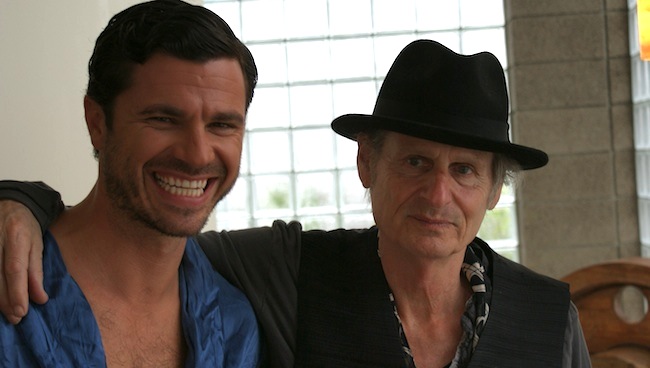 Vassilopoulos came to Hollywood a few years ago from his native Greece, and had the luck to work with Zalman King but also the misfortune to lose one of the best directors he ever worked with, just a few weeks after the completion of their collaboration on the film. King was impressed with Vassilopoulos’ work and there is a high chance the two would have worked together again.

The late director had written an e-mail to Christos a few weeks before his death:

“Your performance was everything I could have wished for. You are a serious talent.  I’m writing some new stuff that I think you’ll like. Can’t wait to work with you again.”

Unfortunately this had to be the first and last movie they would ever shoot, but as Vassilopoulos says in an exclusive interview with the Greek Reporter, “Zalman will always stay in my heart, as he will also stay in every person’s heart who had ever met him.”

When did you first learn about this wonderful director and how?

I never knew who Zalman King was. But I knew as a young boy the super sexual 9 1/2 weeks, Wild  Orchid and many more of Zalman’s films.Everybody, even my parents were talking about all these sexual scenes and I would dare to say, that a lot of us as teenagers fantasized with Zalman’s films. In my opinion, he changed the definition of sexuality, worldwide! Especially in the era of mid 80’s.

How did you meet Zalman King and how did he select you for his last film?
I had an audition for the film and I was going for a smaller part in the film. I had no idea how Zalman looked, much less who he really was. When I entered the production company, he approached me and asked me if I was there for the audition and I said yes. We had an amazing talk for 30 minutes and finally I asked him “what about the casting”? He replied “this is the casting my dear”. He talked to me about himself and what he had done so far, but I couldn’t understand what was going on in the room. He was a magician. His intense look and the style of a gentleman were combined in his personality. Zalman was the Poet of Eroticism! When we finished our conversation he told me that he would send me the script, and that he wanted a quick answer if I would like to be part of his movie. Two days later I got a callback. Three days after the callback, one of the producers, Shane Stanley, called me directly and told me that Zalman wanted to give me the lead in his film. I was so surprised that I answered to Shane “but the lead is an American guy” and Shane replied”but Zalman wants you”.
What is one thing that he taught you as a director, that you will always remember about him?

I asked Zalman once on the set, what he wanted to create through his films. Zalman said “I want to create idols. I want to create a hero that every woman will remember forever.” Zalman taught me to perform through my own personality. He picked me up for that role because he believed that I was the role. He showed me tricks on the set that nobody else had showed me till then, as far as how erotic cinema was performed, created, and executed. His way of dealing with actors on the set was like a second skin. Nobody on the set felt embarrassed or uncomfortable, even though we shot A LOT of sexual scenes.

He had been sick for some time now but he chose to shoot a movie. Did his sickness show on set?

Zalman never showed any kind of sickness on the set. He was always super energetic, full of passion about every scene we were about to shoot. Always on time, with a great sense of humor and really willing to do the best he could. I felt that for his age, he was amazingly energetic on the set. He was the KING of the shooting!

Did he talk about his health condition?
Never! He never mentioned anything about it, never complained. He was a proud man, he was a proud KING!
Since you are Greek, did he ever talk to you about Greece? Maybe he wanted to go, or had been and shared an experience?
We shared a joke when we disagreed for a couple of scenes. He always came to me and he was telling me “We are both Mediterranean darling, I am Jewish and you are Greek! We share the same temper”. He also mentioned that he would love to have a nice theatrical premiere in Greece for K-Love. He loved Greeks and Greek food.
What was the relationship he had with the actors?

Zalman treated his actors with respect, professionalism, and much love. I felt while working with him that I was a part of the family. The family he had created on the set. He always knew what he wanted on the set and he was always pushing for the best.

What is one thing that you remember from shooting with him?
I will remember a lot of things that Zalman said while working and sharing moments on the set. Once I asked him what was the biggest mistake he had made so far in his long career. “One of the biggest mistakes, not the biggest, but probably one of the biggest, was that I was casting for a movie 25 years ago and I had to pick between 2 actors at the final casting. The role was a teenage high school boy. One of the 2 actors was Brad Pitt. And I never picked him up. That was a terrible mistake.” Zalman, the Maestro of The Erotic Cinema,was so intelligent and so genuine ,that he could confess his mistakes through out the years.  And that made him even more attractive and interesting.
Do you think that he expected that his end will come so soon?
As I said, never showed any fear or said anything.
How do you feel that you are the actor who starred in his last film ever?

I feel blessed that I had the opportunity to work with him before he departed our world. I feel that I had an amazing experience, with an incredible director! He will always be in my heart cause Zalman knew how to get your attention, he knew how to transform the sexual scenes into the most atmospheric scenes your eye could devour. All together wrapped with endless sensuality! Thank you King!