Poor Greeks Flock to the Countryside to Become Farmers 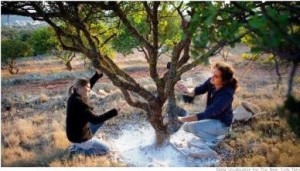 Many newly poor people in Greece are turning to agriculture and Greek nature in search of a better life. More prospects and more hope can be found in farmland activities than in the city, where people are losing their jobs one after another and pensions are being severely cut.
According to a Proto Thema report, pensioners and unemployed people who were suddenly deprived of their income and jobs, are now returning to their villages or other rural areas and cultivating land to make ends meet in a more humane and honorable way.
Municipalities and communities across the country are offering farmlands to people that have no other income, in this way providing an opportunity to cultivate the land, develop their communities agriculturally, and help struggling Greeks earn income.
From northern Evros to the island of Crete, a land consolidation project is being conducted due to the financial crisis, forcing more and more people to abandon the urban life and get closer to nature.
Programs that encourage survival on the agricultural economy are already being launched by several municipalities around Greece, such as Alexandroupolis, Edessa, Thermi, Rhodes, Kozani and Lesvos. In many cities, such as Xanthi and Kozani, the municipalities have created “vegetable gardens”, where people can grow their own vegetable as part of a new economic activity motivation plan, and people in need can eat for free.