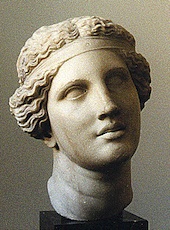 Thessaloniki Mayor Yiannis Boutaris traveled to Paris on Friday to meet with Greek-Cypriot hedge fund manager Elena Ambrosiadou to finalize the details of a deal for the return of eight statues exhibited in the Louvre to Greece, as daily Kathimerini reports. The CEO of Limassol-based Ikos Asset Management had announced in December her intention to pay the 180,000 euros required for copies to be made of the famed statue series, called “Magemenes” (The Enchanted Ones) in Greek, so that the originals can be repatriated to Thessaloniki, a deal that is expected to be concluded within the next few days so that the statues can be returned later this year.
The statues depict the mythical figures Maenas, Dionysos, Ariadne, Leda, Ganymede, Dioscuros, Aura and Nike, and were taken from Thessaloniki in 1864 by French historian Emmanuel Miller. The copies of the statues will be made by the Louvre, after which the originals will be sent to Thessaloniki in time for centennial celebrations of the city’s liberation from Ottoman control in November 1912.
(source: ANSA)