GRNews
GreekReporter.comGreece'Vasilopita' One of the Most Inspirational Traditions of Greek Orthodox Church

'Vasilopita' One of the Most Inspirational Traditions of Greek Orthodox Church 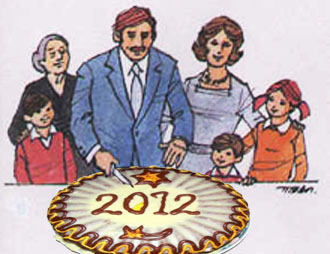 One of the most beautiful and inspirational traditions of the Greek Orthodox Church is the annual family celebration of the Vasilopita. This original event which happened in Cappadocia of Caesarea in the last half of the fourth century, is very much alive in our Orthodox homes each year.
The Greek word Vasilopita is directly translated as “Sweet Bread of Basil”. When the Vasilopita is prepared, a coin is baked into the ingredients. Sweet flavoring is added to the bread which symbolize the sweetness and joy of life everlasting. It also symbolizes the hope that the New Year will be filled with the sweetness of life, liberty, health, and happiness for all who participate in the Vasilopita Observance.
When the observance begins, usually on New Years Day, the bread is traditionally cut by the senior member of the family, and the individual who receives the portion of the Pita which contains the coin is considered Blessed for the New Year.
This age old tradition commenced in the fourth century, when Saint Basil the Great, who was a bishop, wanted to distribute money to the poor in his Diocese. He wanted to preserve their dignity, so as not to look like charity, he commissioned some women to bake sweetened bread, in which he arranged to place gold coins. Thus the families in cutting the bread to nourish themselves, were pleasantly surprised to find the coins.
The Vasilopita is a beautiful tradition, and a custom which should not be neglected by Greek Orthodox Christians. It is such a wonderful way to begin each New Year.