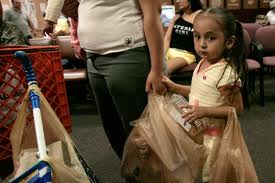 Daily Sydney Morning Herald made an extensive report on a new dramatic phenomenon taking place in recession-hit Greece: Families are beginning to abandon their children because of their inability to take care of them.

More and more families, especially from the middle and lower classes and those with many children, are facing extremely difficult times at this 5th consecutive year of recession plaguing the country. People, who used to struggle to make ends meet, are now at the mercy of the social services, the Church’s food banks and the philanthropy of wealthier fellow people.

With unemployment steadily rising, taxes piling and social benefits cut, many couples are meeting the tough decision of giving up their children, in order to “save” them.

The SMH gives a characteristic example of the situation by referring to a Greek family, whose parents have asked the local town hall to take away some of their kids and spare them the misery they had been living into.

Theoharis Massaras, the deputy mayor and director of social works in Patras, told SMH that requests for social aid have tripled since last year.

According to the Australian newspaper, in a nation as proud as Greece, where family always comes first, the plight of the Greek family hit a nerve.

And this case is not the only one.

The paper fears that with the financial crisis steadily affecting more and more people, the social face of Greece will inevitably change for the worse.

“Newborn babies are being dumped on doorsteps; children are put in foster care, even if officials insist that the belt-tightening will eventually change the EU’s most uncompetitive economy for the better” reports SMH.

”Unfortunately, there’s been a huge increase in demand from families in need,” said social worker Dimitris Tzouras, cited in SMH. ”In the greater Attica region [of Athens], we’re talking about a 100 per cent increase partly because public welfare is in such disarray people have no one else to turn to” he added.