GRNews
GreekReporter.comGreek NewsNew Book on the Meaning of Figurines Found in Delos Island

New Book on the Meaning of Figurines Found in Delos Island 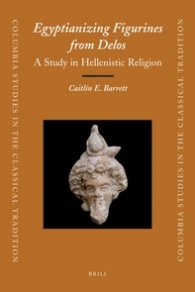 Caitlin Barrett, assistant professor of classics in Cornell University is the author of the newly published 831-page “Egyptianizing Figurines From Delos: A Study in Hellenistic Religion” (Brill 2011), which explores the meaning of figurines found in the Greek island of Delos.

According to Mrs. Barrett’s book, residents of Delos in the second century BC did not feel preoccupied against worshiping foreign gods along with their own.

Mrs. Barrett examined terracotta figurines found in Delos in order to shed light on the influence the Egyptian religion had had on the Hellenized inhabitants and their daily lives.

“Terracotta figurines represent potential evidence for the religious ideas of a wide swath of the population, not just the rich, because such inexpensive figurines were accessible to many” says Barrett.

An analysis of the objects’ clay fabrics and manufacturing techniques indicates that most were made on Delos.

Additionally, archival research on unpublished notes from early excavations reveals new data on many figurines’ archaeological contexts, illuminating their roles in both domestic and temple cults.

A comparison of the figurines’ iconography to parallels in Egyptian religious texts, temple reliefs, and ritual objects suggests that many figurines depict deities or rituals associated with Egyptian festivals.

“The fact that somebody’s dedicating a figurine of a Greek goddess like Aphrodite to an Egyptian goddess like Isis suggests that the two were associated, or at least that their worship wasn’t considered incompatible,” R&D cited Barrett.

The results offer a new perspective on Hellenistic reinterpretations of Egyptian religion, as well as the relationship between “popular” and “official” cults.