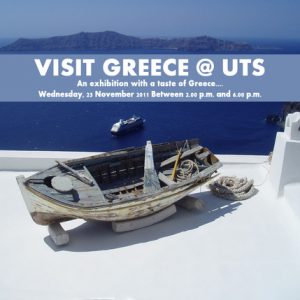 UTS (University of Technology in Sydney) hosted an exhibition about Greece for the first time on Wednesday, November 23, from 1 to 6 pm.

The event was organized in order to promote tourism in recession-hit Greece in need of the help of tourists, of leaders of the community and of Greeks of the diaspora to make it through the current financial and political hardships.

The “Visit Greece @ UTS” was a collaboration of the UTS, the Greek Press and Communication Office, the Greek Tourism Office and the Education Office of the Embassy of Greece in Australia under the auspices of the Consulate General of Greece in Sydney.

The exhibition aimed at promoting cultural and touristic information about Greece to aid the country in the best possible way.

Nicholas Economidis, Consulate General of Greece in Sydney told Neos Kosmos that the consulate had been speaking with BuILD (Beyond UTS International Leadership Development) for over a year to coordinate an event to promote Greece.

“We wanted to organise a small event at first, like a Greek day, in order to showcase Greece and the positive aspects of our country “ he explained. The university’s program BuILD has also come on board to support the exhibition showcasing the best of the Hellenic Republic.

Fiona Tschaut, who heads the program BuILD, says that Visit Greece @ UTS is a “great opportunity for students to have Greece at the forefront of their minds” and also enable students to make connections and network with people from the Greek community in Sydney.

The event included performances of Greek traditional dancing, stalls with Greek delicacies as well as a lottery with gifts for everyone attending.

Other universities across Sydney have expressed their interest in hosting similar events at their own premises, while, moreover, the UTS plans inaugurating a student exchange programme with Greek universities from July 2012.