World Premiere of "Frankenstein: Day of the Beast"

By Maria A. Karamitsos
November 23, 2011
Facebook
Twitter
WhatsApp
Linkedin
Email
Greek-American film company Thespis will present the World Premiere of its new film, FRANKENSTEIN: DAY OF THE BEAST this weekend. It’s a retelling of the classic story, produced by Andrew C. Mathews, executive produced by John Marinopoulos and Elias Plakias. 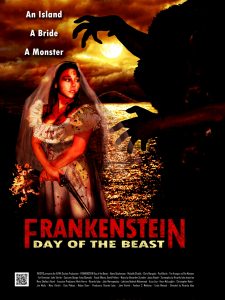 “We stayed within the plot to honor Mary Shelley’s legendary original, but we added our own twist to the storyline. It’s a brand new ride on an old name you know well,” said Ricardo Islas, director and producer. “It’s an action packed, old-style Hammer type of movie, completely filmed in Chicago and showcasing outstanding Chicago actors Adam Stephenson, Michelle Shields and Tim Krueger. This is a take on Frankenstein that you’ve never seen and will never forget.”

Thespis will host the World Premiere of the film November 27 at 4:00 pm at the historic Portage Theater. The movie will also be shown at the Greek-owned Pickwick Theatre in Park Ridge on December 1, at 7:00 pm and 9:15 pm.

Previous Thespis films include SLIGHTLY SINGLE IN LA (2011), BLACK BUTTERFLY(2010) and STREET CORNER SYMPATHY (2010). In production now is a horror flick DRAKULA based on “Vrykolakas,” a Greek version of Dracula. “The true origin of Dracula came from Greece. We did some digging, and actual events took place in Greece. We’ll use these events to unveil the story,” Marinopoulos explained. Another project close to their hearts is AYIOS – written by Mathews, with a budget of $70 million – about the brutal Turkish invasion of Cyprus in 1974.

The name Thespis pays homage to the 6th Century BC actor who, according to certain Ancient Greek sources, was the first person ever to appear on stage playing a character in the play, as opposed to speaking as him or herself.