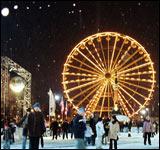 Greek National Tourism Organization (GNTO) Office in Belgium has accepted Brussels’ invitation to participate in the country’s mammoth annual Winter Wonders event. The market will host 8 Greek chalets – one per province – showcasing the expertise of its artisans. There will also be gastronomic specialties and Greek products such as certified olive oil.

GNTO in Belgium aims at promoting Greek tourism in the best possible way based on 2011 figures showing that almost 72.000 tourists use Belgian airlines to visit Greece.

In their joint press conference, Mayor of Brussels Freddy Thielemans and GNTO Secretary General Georgios Koletsos stressed out that the choice of granting Greece the guest of honour at 2011 Winter Wonders was based on the decision of the Municipality of Brussels to aid Greece in transmitting positive tourism possibilities to the Belgian public at such harsh economic times.

Brussels’ Winter Wonders is the third major Christmas market organized in Europe and the festivities take place at the Grand-Place in Brussels and around the Bourse, the Place Sainte-Catherine and the Marché aux Poissons.

The event is being organized for the 10th year in a row and aims a target-group of 2.5 million people, 20% of which are potential tourists, who will have the unique opportunity of wandering around Brussels in a most celebrating atmosphere.

The access to Winter Wonders and the Christmas market is free and this year a Christmas market with approximately 240 chalets, a fairground attractions (big wheel, merry-go-rounds,etc.), an ice rink for skating and a Christmas tree on the Grand-Place will be included.