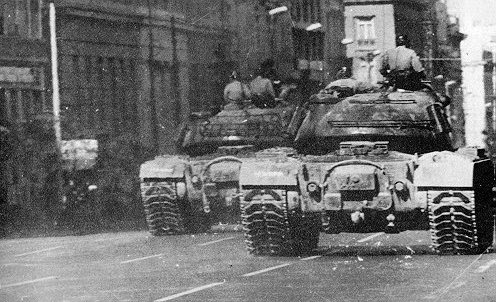 “Instead of pouring euros down the drain, it would be much wiser for Germany to sponsor a military coup and solve the problem that way.”  No, this extract is not from a fascist blog. It is from Forbes magazine and it’s just another one of the provocative articles that follow this insane ongoing anti-Greece campaign of international media.
The article circulates a joke going around the financial markets at the moment that Greece’s only chance to be saved is a junta. “What’s so sad, or bitter if you prefer, about the joke is that, if we ignore the little problem of it being a military dictatorship, this would in fact be a good solution to Greek woes.” This “little problem” Mr. Worstall so cynically refers to, doesn’t sound very funny to Greek people who have already been through one dictatorship, from 1967 to 1974 during which Greek people suffered enormously.
In fact in two weeks time Greeks will be celebrating the anniversary of the Athens Polytechnic uprising in 1973, an open anti-junta, revolt that ended in bloodshed in the early morning of November 17 after a tank crashed through the gates of the Technical University of Athens. This revolt was the beginning of the junta’s collapse. What’s really ironic is that the junta was in fact the result of foreign interference and oppression by right-wing governments that simply didn’t care about their people’s fate. Thirty seven years on, Greeks experience a new junta, this time financial while the prejudice against them has taken absurd proportions.
Ever since September of 2009, the propaganda machine has been running at full speed.  The mainstream media provides Europe and America with a convenient scapegoat to exploit. Greeks are an easy target. “They are cash junkies”, “They are lazy”, “They are useless”.  All these stereotypes of Greeks being lazy couldn’t be farther from the truth. Most Greeks are struggling just to survive. Yes, there are Greeks benefiting from high and early retirement. Yes there are civil servants making 4,000 euros a month without actually showing up to work and yes some of them are getting bribed. But they are an exception, not the rule.
Numbers don’t lie. The national blues literally kill Greeks. Suicide rates have doubled since last year. Private sector employees work endless hours for 400 euros a month. Young couples don’t have children simply because they can’t afford to while thousands want to emigrate. The majority of Greeks are not, in other words,  chilling on the beach drinking frappe and ouzo.
But none of this matters to the leaders of the European “Union”. For them it seems that the question is always about getting their money back with maximum profit when it really should be about helping a country to recover since they are also largely responsible for its troubles.
Why don’t Brussels technocrats push the government to take money from those who are actually responsible for this tragedy? Why don’t they hunt down the country’s elite, the tax evaders, the corrupted politicians, the businessmen and the ship owners who made trillions at the expense of ordinary Greeks? Why is it logical that the already deprived pensioners and workers have to pay for something they have no share of responsibility in whatsoever, when those who caused it still live in Athens exclusive suburbs, drive Porsche Cayennes, have their kids in expensive private schools and when they are sick they don’t run to overcrowded public hospitals but prefer private clinics that look like five star hotels?
It is the same people who now have hundreds of millions of Euros in off-shores and bank deposits in Switzerland and couldn’t care less if this country is going to burn down. In fact, they would probably prefer Greece to go bankrupt  and return to the drachma as they would buy everything off for peanuts!
It is as if the EU’s only goal is to turn the Greek middle-class to a new underclass and to be fair they’ve done an excellent job! And what exactly is the goal of this “rescue plan” and the “task force” that from now on will be permanently placed in Athens?
Will the “task force” actually force all these people who will not be able to pay their mortgages out of their homes and  make them homeless? Will they cut defaulters’ water and electricity and force them to die of cold and thirst? Will kids in villages be forced out of school simply because it’s too expensive?
Maybe the Europeans  should rename this plan to the “Elite Rescue Plan” because when it comes to pensioners and workers it sounds more like an “execution plan”.