Oaks Being Cut Down Illegally! 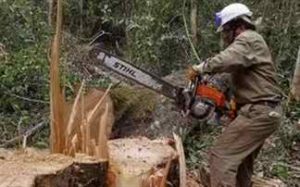 Not only have fires already destroyed a large percent of Greek forests, but it recently been discovered that a group of Albanians have been entering the country illegally to cut down oaks!
The department of Boarder Guard in Prespa caught two of them, but the horses they brought with them in order to carry the illegal timber unfortunately managed to escape.
The policemen traced two men aged 22 and 68-years-old, who had illegally passed through Greek boarders, cutting oak trees in the forest area of Vrontero in Florina.
The two men were led in front of the Prosecutos of Florina, where police seized from their possession the illegal wood and an axe.
The same problem is being faced at the forestial area of Polydroso in Souli, where the residents find every day that many trees are being cut.  The suspicions fall on loggers who cut the trees before the winter comes, in order to sell them later, causing notable ecological damage.