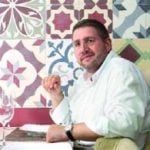 Greek Academic, Charis Tzimitras, who has lived for 10 years in Turkey, makes a simple suggestion to the Greek Government in order to unify the two sides of Aegean Sea: “Instead of dogfights, deposit the money spent for dogfights in order to make charities in Turkey. In this way, many will realize that it is not the end of the world.”  And even if someone thinks that this is an “academic naivety”, Charis Tzimitras remains optimistic about the efficiency of this measure.

Tzimitras, who is giving lectures to the university of Bilgi in Turkey is constantly involved in both countries. Viewing the two countries within, Tzimitras admitted: “Greek public opinion intervenes more often in the everyday incidents, protesting, and organizing demonstrations. On the contrary, Turkish public opinion either does nothing or has a limited reaction to incidents. That has as a consequence; the different actions of the two Governments.”

However, Turkish Government has made it clear that Greece is neither an enemy nor a priority for Turkey. There is a current economic crisis in Greece that constitutes a chance of redifinition of Greece’s position and its priorities, such as the limitation of defense expenditures.