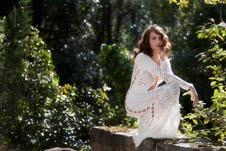 What can possibly be said about the talent of Marina Tsigonaki! The famous Greek dj- known also as Ladydust- strikes again!

She’s in fact, the voice of Jewel- the leading parrot at the blockbuster Rio- the animated Fox film that was a huge success both at the US and European box offices…who wouldn’t know that! And lately she appeared as a guest for the reunion of the hippies, which is actually the special festival that took place after 40 years and was covered from all the big musical channels and networks.

Giving a little background history, we need to point out that Marina has toured as a dj in more than 20 cities in her country, she also opened for concerts and festivals like the one of “The Pierced Arrows” and it’s no surprise that she must be one of the few female public figures, internationally, who’s into the “underground music stuff” and as a result, her stocks have sky rocketed.

It comes as no surprise that her life style has inspired many artists around the globe who literally seek her permission to “remake” and use her shots in art competitions and institutions.

At the moment in Greece, you can find her face being used as a comic figure on the cover of the new book of editor M.Daloukas, which is a book tribute to legendary Greek rocker Pavlos Sidiropoulos. We also saw her during the latest Fashion Week of Athens that took place at Gazi (Technopolis), stepping to the catwalk of Katerina Alexandraki. On that fashion show, Ladydust wore an outfit that Katerina made especially for her and played her notorious dj set that fashionistas loved.

With regards to movies, she also made an appearance next to Rudger Hauer in the movie “Portable Life” and “Denousa” which is a short horror documentary movie.

The new season finds her discussing about presenting an ambitious, alternative musical- cultural tv magazine about the world wide rock’ n’ roll scene, something which is cut more for her style.

She never stops attending various acting seminars and above all she tries to lead a “disciplined” life, regardless of her weird schedule. No wonder her very own icon is…Wonderwoman! She believes that ” one day she and Ladydust will become friends”…that will be the day!!