History Brought to Life as Battle of Marathon Re-enacted (video) 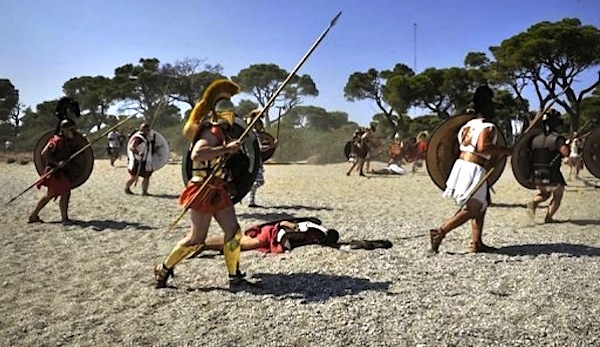 Sweating beneath heavy armour, a group of die-hard archaeology fans brought the Battle of Marathon to life this weekend on the coastal plain where the fate of Europe dramatically changed 2,500 years ago.
Gathering from Europe, North America and Australia, the re-enactors staged a three-day event of combat, archaic culture revival and commemoration at Marathon Bay never before seen in Greece despite its rich archaeological heritage.
For many of the participants, it was also a personal pilgrimage after long years of arduous preparation and unfulfilled hope.
“It’s a dream come true after 10 years,” said Hywel Jones, a printer from Wales who came to Marathon with his wife Stephanie to fight as a Greek hoplite, the heavily armed infantry soldier of ancient Greece.
Most of the re-enactors had spent thousands of euros (dollars) on travel expenses just to get to this small town 40 kilometres (25 miles) northeast of Athens that is better known for the long-distance race held here every year.
They brought with them family members as well as hand-made armour and kit crafted over the years at great personal cost.
“I don’t think I’d be exaggerating to say that standing around is $1 million in kit and travel fare,” said Christian Cameron, a Canadian novelist and former US navy career officer who headed preparations for the event.
“What you see today is the product of 11 years of work,” added Andy Cropper, a university lecturer from England’s Sheffield region and member of a British historical revival association who arrived with several sets of Greek, Persian and Scythian armour in tow.
“It was worth spending the money because it’s such a unique event, as a Greek re-enactor, to be able to be on the field of Marathon,” he told AFP.
The re-enactors initially had to persuade their hosts in Greece that this was the correct moment to commemorate the 2,500-year anniversary of the 490 BC battle in the bay of Marathon.
“Originally everybody thought it was last year, and of course it wasn’t, as there’s no year ‘zero’,” Cropper noted.
Few in number but no less determined, the group showed they meant business from the start, setting up camp near the presumed battlefield, sleeping on straw-filled mattresses and serving up a simple diet of vegetables, fruit, cheese and water in wooden bowls and cups.
Spare armour was quickly put to good use among the combatants as a set of last-minute cancellations and the loss of a large contingent from Bulgaria left the event badly short of Persian adversaries.
“We would have had 15 more hoplites but what we really missed is that the Bulgarians were Persians, and that would have helped us a lot,” Cameron said.
Organisers had initially hoped for a turnout of 200 but had to settle for 50 battle-ready Greek hoplites and a handful of Persian archers.
They were also refused permission from the Greek culture ministry to access archaeological sites such as the tomb of the Athenian warriors slain in the battle, and the ancient Agora and Acropolis in Athens.
But the municipality of Marathon was more amenable, providing logistical support and allowing the group to hold a memorial ceremony to honour the Greek and Persian fallen at the battle’s victory monument.
“I think the town would like us to come back every year,” Cameron said, though the cost to the participants makes an immediate re-run unlikely.
“I think it would be three years,” he notes. “They want to do it again, we’ll do it better. Fifty people is a start, 500 is an achievable goal.”
One of history’s most famous military engagements, the Battle of Marathon is also one of the first to be recorded by chroniclers.
It gave its name to the world’s premier long-distance running event, inaugurated during the first modern Olympics in 1896 in honour of an Athenian messenger believed to have run back to the city to deliver news of the victory, and subsequently dying of exhaustion.
Although only the citizen armies of Athens and Platea fought against the Persian levies that day, the battle galvanised the warring Greek city-states and demonstrated that the Persian Empire, the superpower of the age, could be defeated.
“People argue that it is the battle where the Greeks saved Western civilisation. People can equally argue that it was the moment at which a great civilisation, the Persian civilisation, lost control of the West,” Cameron said.
(source: AFP, foto: Louisa Gouliamaki)
[youtube]21fu8jYLV2Q&feature[/youtube]