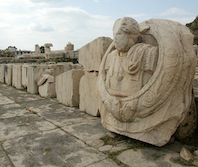 Attica prefecture security police announced late Thursday that with the cooperation of the Culture Ministry, they have now solved the April 15, 2011 case of a major theft.  The theft concerned stolen antiquities from the archaeological site of Elefsina.
Police located and arrested two Romani people who had the stolen antiquities in their possession.
The perpetrators, on the night of April 15th, snuck into the archaeological site and museum of Elefsina, unnoticed by the guard and stole over 50 antiquities of great value.
Following an undercover investigation, police located the two suspects in a Roma camp in Zefyri, western Attica, and posed as buyers.  They made contact with the two suspects. A meeting was arranged, where the two suspects were arrested and all the antiquities were retrieved.
The two detainees are currently being questioned by a local prosecutor.
(source: ana-mpa)