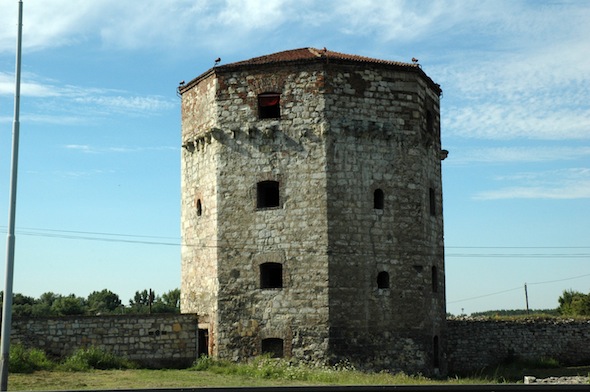 Greece’s President Karolos Papoulias and Serbian President Boris Tadic will jointly inaugurate the landmark Nebojsa Tower in Belgrade on Friday. The recently renovated tower was the prison in which Greek independence struggle hero Rigas Velestinlis (also known as Ferraios) was put to death by Ottoman Turkish authorities in 1798.
Following the inauguration ceremony, Papoulias will be shown around all four levels of the new museum and then have a private meeting with his Serb counterpart, after which there will be a dinner in honour of the Greek delegation.
Papoulias will be accompanied by Deputy Foreign Minister Spyros Kouvelis.  His itinerary during his stay in Belgrade will include a visit to the Serbian Patriarch.
The renovation of Nebojsa Tower was funded by Greece and the municipality of Belgrade and carried out over two years, at a cost of 1.8 million euros. The Greek state, via the Greek Foreign Ministry international developmental aid service ‘Hellenic Aid’ has paid 1.38 million euros toward the project.
The tower will serve as a museum exhibit site featuring exhibits related to the life and work of Rigas Feraios and also to the Serbs’ own struggle for independence from Ottoman rule. The second story of the four-story tower will be devoted to Feraios and the Greek revolution.
Other exhibits will focus the tower’s use as a prison at the end of the 18th and the start of the 19th centuries.
Nejbosa Tower is a medieval structure built by Hungarians on the ruins of an older Roman tower dating from the 1st century A.D. It was destroyed and rebuilt several times in its history. Rigas Feraios was imprisoned there for roughly seven months before he was put to death by Turks, becoming one of the first martyrs of Greece’s struggle for independence.