Greek President Karolos Papoulias urged neighboring Turkey to reconsider plans to build atomic power stations after a March 11 earthquake and tsunami damaged Japan’s Fukushima Dai-Ichi nuclear plant.
“It’s impossible at this time, when we have this disaster at the nuclear reactors in Japan that has shocked us all, that Turkey should want to build in an earthquake zone,” Papoulias said during a visit to a satellite station, according to an e- mailed transcript of his comments from his office in Athens.
Turkey wants to build two atomic-power plants, one near the town of Sinop on the Black Sea coast and the second at Akuyyu, 25 kilometers from a seismic fault line. Greece and Turkey are the two most seismically active nations in Europe.
Turkish Prime Minister Recep Tayyip Erdogan should think this over “many times” and “the Europeans should intervene to prevent a disaster that would be in our own backyard, at our own doorstep,” Papoulias said. 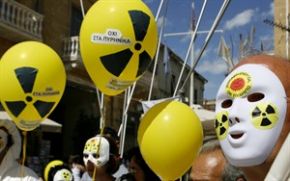 Cyprus activists protest against Turkey’s plans to build nuclear plant near island
About 50 Greek Cypriot and Turkish Cypriots wearing masks and white overalls during Saturday’s protest also called on all anti-nuclear activists from Greece and Turkey to join in opposition to this “ecological crime”.
Citing Japan’s nuclear crisis, they said the plant to be built at Akkuyu on Turkey’s southern coast sits close to a “dangerous” fault line and could threaten Cyprus 100 kilometres (62 miles) away if it’s damaged in a quake.
Cyprus government spokesman Stefanos Stefanou said the government would raise its concerns over the issue at an European Union summit next week.

Greece called again for talks with Germany on wartime reparations on the 80th anniversary of the Nazi Occupation, which begun on April 6 1941.
Greek church