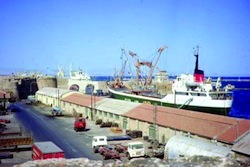 There is no “Plan B” for Turkey to join the European Union so long as disputes over Cyprus remain, EU Enlargement Commissioner Stefan Fuele said yesterday, urging Ankara to open ports and airports to traffic from Cyprus.
Turkey fears that its already flagging membership bid could hit a roadblock once three more negotiating chapters – policy areas of EU law – are opened, since all the remaining fields are blocked, mainly because of Cyprus.
“No, we don’t have a Plan B,” Fuele said at a gathering of European civil society organisations in Istanbul, adding that there was no way of by-passing accession rules.
Turkish leaders have sounded increasingly impatient with the lack of progress in entry talks that began in 2005, though membership remains their top declared foreign policy goal.
Of the 35 policy chapters, Turkey has completed one, 12 remain under discussion and 18 have been frozen because of opposition by EU member states including Cyprus and France.
Under EU treaty rules, a single member state can block each stage of the accession process, since opening and closing chapters requires unanimity.
Fuele said 13 chapters would be freed for negoation if Turkey opened its ports and airports.
Turkey has said it will honour the 2004 Ankara Protocol on sea and air links if the EU also ends a trade embargo on the Turkish part of northern Cyprus, as it does not want to make Turkish Cypriots feel they are being abandoned.
Turkey’s leaders have accused some EU member states of using the Cyprus issue to block Turkey’s bid and have aired suspicions that some do not want a Muslim nation, with growing economic muscle and a large population, in the 27-member bloc.
Egemen Bagis, Turkey’s Minister for EU Affairs and chief negotiator, sitting alongside Fuele, said Turkey intended to complete harmonisation with EU laws by 2013, and chided EU governments for allowing Cyprus to block progress.
“As far as the Commission and the other states are concerned I think the real question is how long can we let this spoiled member of EU – the Greek Cypriot administration – hijack the interests of the European Union at large,” Bagis said.
“It is time for the 26 other nations to wake up and smell the coffee.”
Bagis said a recent survey showed that roughly two-thirds of Turks wanted EU membership, but two-thirds thought it would never happen.
(source: cyprus-mail)