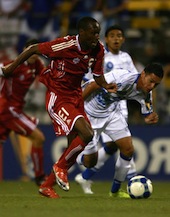 Earlier this week Canada’s head coach Stephen Hart, named his 18-man squad to play Greece in an international friendly match.  The game will take place in Larissa, Greece on Feb. 9th according to CanadaSoccer.com. Included are many of Canada’s best players based in Europe, such as PSV Eindhoven midfielder Atiba Hutchinson and Hertha BSC striker Rob Friend.
The squad features one new call-up, goalkeeper Milan Borjan, who plays for Serbian side FK Rad. Also waiting to make their national team debuts are FC Timisoara midfielder Tosaint Ricketts and Burnley F.C. defender David Edgar.
The squad mostly features internation players, with only three players in the original squad based in North America.  This includes Toronto FC’s Dwayne De Rosario, Real Salt Lake’s Will Johnson and D.C. United’s Dejan Jakovic.  Toronto FC defender Adrian Cann was added to the squad after the German-based Kevin McKenna pulled out due to injury.
One notable absence from the Canada squad is Blackburn Rovers starlet David Hoilett, who is also eligible to play for Jamaica and has yet to decide on his international future, citing his desire to focus on his club career.
The match will take place at the A.E.L FC Arena in the northern Greek city of Larissa and kicks off at 10:oo a.m. ET.