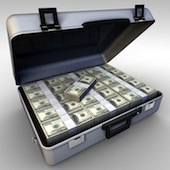 Greek Public Debt Agency will proceed with the auction of 13-week treasury bills worth EUR500mn on January 18th, according to a statement on Friday.
Settlement date is set for January 21st, with maturity on the 26th of April.
Only Primary Dealers are allowed to participate, according to their operation regulations. During the auction non-competitive bids can be submitted up to 30% of the auction amount. On top of that, Primary Dealers can submit non-competitive bids up to another 30% of the auctioned amount, until January 20.
No commission will be paid for the T-Bills auctioned, said the agency.
Greece successfully raised EUR2.4bn on Tuesday in an issuance of 6-month treasury bills that was oversubscribed 3.4 times, and resulted in a yield of 4.9 percent.

How Does Odysseus’ Bow Fare Against Modern Versions of the Weapon?