Clash Between Protestors & Police at 2nd Anniversary of Grigoropoulos' Death 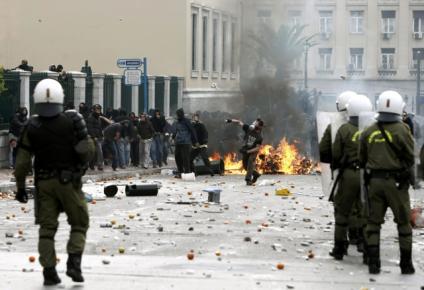 Clashes broke out in the center of Athens between youths and Greek police.  Thousands gathered near the main building of the University of Athens to commemorate the second anniversary of the killing of 16-year-old Alexandros Grigoropoulos by police. Thousands of Greek students, teachers and public servants held a three-hour work break.  They took to the streets in Athens, rallying at the Syntagma square in front of the parliament building.  They launched a series of demonstrations.
Some 2,500 protesters marched through central Athens.  A few hundred protestors threw stones, oranges and bottles at police and smashed bus stops and shop windows.  Police responded with tear gas and percussion grenades. “Protesters threw three petrol bombs,” said a police official who declined to be named.
Traffic was banned on main avenues and squares.  Many shops had placed metal grills on their windows, fearing violence.
16-year-old Alexis Grigoropoulos was shot dead by police in December 2008.  It sparked massive riots in cities across the country that lasted two weeks and caused extensive damage to state buildings, businesses and cars.
In October a Greek court convicted a 38-year-old policeman of murder and sentenced him to life imprisonment for the shooting of the teenager.
A second officer, 32-year-old Vassileos Saraltiotis was convicted of complicity and sentenced to 10 years in prison.