GRNews
GreekReporter.comGreeceNew Kallikratis Plan Implemented in First Round of Elections

New Kallikratis Plan Implemented in First Round of Elections 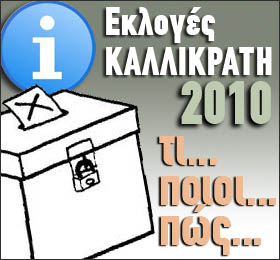 The first round of local government elections using the new Kallikratis plan begins in Greece on Sunday, November 7th.  Election hours will be between 7:00 a.m. and 7:00 p.m.
This election introduces a number of new elements following the sweeping changes to the boundaries of local authorities under the Kallikratis plan.  This plan greatly reduced the number of municipalities but also made them much larger.  It abolished the second-tier local authorities governing prefectures and introduced 13 elected regional authority governors.
The recent announcement by Prime Minister George Papandreou that a poor result for PASOK may lead him to consider the prospect of early general elections has also raised the stakes a great deal higher than usual for a local government election.
In areas where there is no clear winner during the first round of elections, there will be a second round on November 14th using the same procedure.
If the vote fails to take place in a municipality or in one or more polling stations for any reason, another election will be held on Wednesday, November 10th.
Those eligible to vote for municipal councils and mayors are Greek national resident in the municipality over 18 years old and registered in their municipality or community electoral roll.  Additionally nationals of any European Union member-states that are over 18, permanent residents of Greece and registered in the special electoral rolls of the municipality where they reside (up until August 31, 2010).
Those eligible to vote for regional authority officials do not include EU member-state citizens, Greek expatriates without Greek nationality and legal residents from third countries.
Those deprived of their rights to vote cannot vote in these elections.
Those that have no obligation to vote in the elections are foreign nationals, those aged over 70 and those that are more than 200 kilometres from the polling station where they vote; this must be certified by the municipality in the location they are in.
Those wanting to vote must display either a police ID card or temporary replacement issued by a proper authority, a valid passport, a driving licence, or social insurance fund booklet. Voters not included in the electoral roll that have not been deprived of their voting rights can apply to the municipality or community where they are registered in order to request a certificate that they are registered in the municipal register in order to exercise their voting rights.
(source: ana-mpa)