Deal to sell shipyards may sink 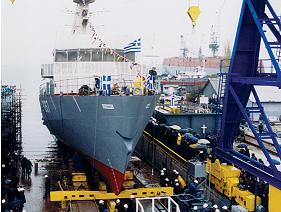 A major deal for the United Arab Emirates-based Abu Dhabi MAR Group to buy Hellenic Shipyards (HSY), also known as Skaramanga, appeared to be floundering yesterday, apparently over the failure to settle several outstanding debts that still burden the shipbuilding facility.
According to sources, MAR looks set to pull out of the agreement, which was only rubber-stamped by Greek Parliament last month, because HSY still owes 238 million euros in fines to the European Commission for illegal state subsidies that it received in the past. The prospective buyers are also thought to be unhappy with the fact that the shipyards’ current owner, German group ThyssenKrupp, has not settled its tax bill with the Greek state.
Abu Dhabi MAR also appears to be concerned that Brussels has written to Greece asking it to cancel the deal and issue an international tender for just the shipyards’ commercial operations so that it complies with EU competition regulations.
The deal to transfer ThyssenKrupp’s 75.1 percent stake in HSY to the Abu Dhabi MAR group was announced on September 19. “After tough and painful negotiations that on occasion reached the verge of failure, the negotiating teams today initialed the deal,” a Defense Ministry statement said at the time. No financial terms were disclosed.
However, it was clear even at that stage that some problems still had to be ironed out. Iskandar Safa, the managing director of Abu Dhabi MAR, cautioned that “further steps still need to be taken” before the contract comes into effect.”
ThyssenKrupp fully acquired HSY, the eastern Mediterranean’s largest shipyard, in 2005 but the German steelmaker decided last year to sell the company, accusing the Greek government of breach of contract and of missing payments on a deal to build four submarines for the Greek navy.
(source: kathimerini)