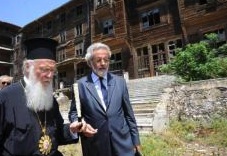 The General Directorate of Foundations Council decided unanimously on Wednesday to reinstate the legal title of Prinkipo (Buyukada) Orphanage to the Ecumenical Patriarchate, in line with the ruling of the European Court of Human Rights (ECHR).  It was confirmed to ANA – MPA by Pantelis Vingas, member of the Council. Yesterday was the last day of the compliance deadline designated by the court ruling. The registration of the legal title in the name of the Patriarchate is expected to take place next week at the Turkish National Cadastre.

This is the first time a property title is returned to a religious minority.
The Council of the General Directorate of Waqf Foundations unanimously decided to reinstate the legal title of the Orphanage in compliance with the relevant decision of the ECHR. The decision overturns “information” supporting that the Council will seek new ways to refrain from implementing the decision of the ECHR.
The decision on the proprietary status of the Orphanage title also paves the way towards the return of 23 more Orthodox Institutions located in the Princes’ Islands of Prinkipo, Halki, Antigone, Proti.

The building of the Orphanage will reopen and serve as a centre for Interfaith Dialogue and Peace and as a World Environmental Center.
The Orphanage is the largest wooden building in Europe and second largest in the world.  It was built in 1898 by a French company running the Orient Express as a hotel. In 1902 it was purchased by a family of Greek bankers and in 1903 the property was transferred to the Patriarchate which used the building as an orphanage. In 1964 the Orphanage was closed during the crisis over the Cyprus issue and has never operated again.