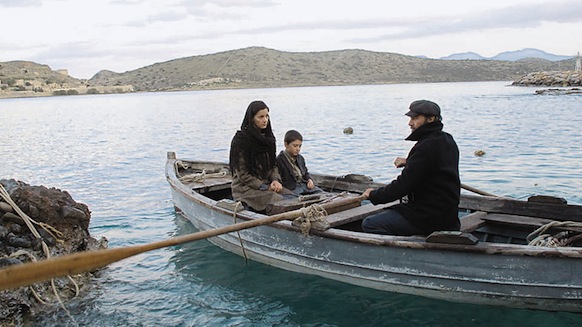 “Here, one feels that there is an invisible force that urges you to tell the story,” says Thodoris Papadoulakis.  He is the director of a television series that was just launched on a private Greek TV station based on British writer Victoria Hislop’s best seller “The Island” .  It recounts the fictional story of a family’s ties to the now unoccupied island of Spinalonga that served as a leper colony from 1903 to 1957.
Many Greeks were anxiously awaiting the premiere for this series, which is the most expensive production that the TV channel MEGA has ever taken on. Even the people of MEGA TV were surprised by the overwhelming response.
According to AGB the numbers for the series on the first night they were as follows:
People Watching in Total: 48.3%; 58.9%; 65.5%; 61.6%; 44.2%
People Watching ages 15-44: 53.7%; 65.4%; 72.8%; 69%; 49%
“That must be how Victoria Hislop felt, who revives a stigmatized era in her book ‘The Island’,” adds Papadoulakis.
After 1957, when the last patient left the island, Spinalonga fell into abandonment until it was re-discovered by tourists in recent years.
Spinalonga boasts its own glorious pages of history. Located off Lassithi prefecture in eastern Crete, the island’s name has its roots in the Venetian period, coming from Spina Longa meaning “Long Thorn”.
Due to its position, the island was fortified from its earliest years to protect the entranceway of the port of Ancient Olous. Significant fortifications as well as buildings of architectural interest today were built later by the Venetians.
Mr. Manolis Fountoulakis, the last survivor of Spinaloga, passed away this past summer and the age of 86 years old.
[youtube]DktNPqXiizU&feature[/youtube]