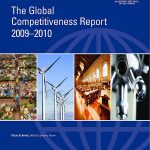 Greece fell to the 83rd place in the global competitiveness index of the World Economic Forum this year.  This is down from 71st in 2009, reflecting a worsening of the macro-economic environment in the country.
A WEF report stated that the worsening macro-economic environment combined with the “poor” operation of institutions and low-market efficiency pushed Greece lower in the global competitiveness list, at the bottom of the list amongst EU’s 27 states.
Greece ranked 84th in institutions, 42nd in infrastructure, 123rd in macro-economic environment, 40th in health and education, 42nd in higher education, 94th in market efficiency, 93rd in financial market development, 46th in technological readiness, 39th in market size, 74th in the specialisation of enterprises and 79th in innovation.
Switzerland remained at the top of the global list, followed by Sweden (up from fourth in 2009), Singapore, the United States (down from second place last year) and Germany (up from sixth in 2009).
(source:ANA-MPA)