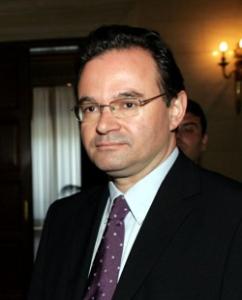 George Papandreou retained Finance Minister George Papaconstantinou in the cabinet reshuffle announced early today but changed other key officials involved in the effort to reform the country’s troubled economy. Under the changes announced early this morning the Ministers of Development, Labour and Health were replaced.
Greece’s governing socialists face regional elections in November that will test tolerance for harsh imposed austerity measures. Ministries related to the economy are facing major reforms and are subjected to frequent inspections by budget enforcers from the European Union and International Monetary Fund.
The changes were seen as boosting the role of the Finance Ministry’s control over economic reforms. Several older party members who served in previous socialist governments returned to the cabinet in an apparent effort to woo traditional party supporters who are less likely to back the economic austerity.
The new government will be sworn in later today.

Found with a metal detector in his hand, a 68-year old man was arrested on Sunday for illegally excavating in the archaeological site of Amphipolis.
Crime