Betty is Back and Here to Stay 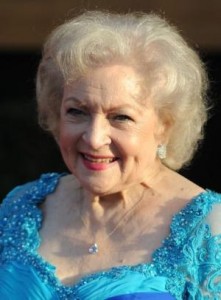 Betty White’s re-found fame started Back in January when a Facebook group called “Betty White to Host SNL (please?)!” was created, and membership grew rapidly to half a million. The fans were granted their wish on May 8th when White hosted SNL, earning an Emmy Award for her participation. Since then Betty is back and here to stay!

We can’t seem to get enough of eighty-eight year old Greek-American Actress and Facebook legend, Betty White.  Not only is she being offered leading roles on the big screen, but she will now be writing a series of books called “Books by Betty”. The first book called Listen Up!, will be published in 2011 and will talk about White’s life experience and career including topics like sex, love, aging and celebrity. Her second book, The Zoo and I: Betty and Her Friends, will contain stories and photographs of Betty with animals at various zoos. The book is to be released in 2012.  White admits, “Much as I love what I do for a living in show business, I love writing even more — so I am thrilled to be working on not only one new book but two of them”, who is also board member at the Los Angeles Zoo.

In 1997, White published an autobiography about her life. Since that time, she has done so many things in her life. It is time for Betty to share more of her stories and wisdom with the world in her new books.