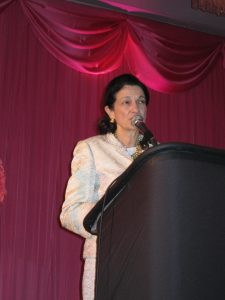 The color pink took center stage recently, as Greek Americans joined forces to fight breast cancer. US Senator Olympia J. Snowe of Maine appeared in Chicago as keynote speaker for “Greek Americans Against Breast Cancer.” The word cancer remains somewhat taboo among Greek Americans, and with valiant stories from survivors, thoughts from a prominent oncologist, and the inspiring words of Senator Snowe, this event helped to dispel the shame and secrecy. The evening’s MC was Jane Monzures, host of “Living Healthy Chicago.”

Snowe has long been an ardent advocate of women’s health initiatives, and this issue is especially close to her heart – her mother passed away from breast cancer when Snowe was just nine years old. The senator proudly spoke about her Greek roots – her father was born in Mytilini and her mother was the daughter of immigrants from Sparta. She attended Saint Basil Academy in Garrison, NY, which she referred to as “a great gift, as there I learned religion, history, language, culture, leadership skills.” There, she had her first taste of politics, when she was elected president of the dorm. Following the untimely death of both her parents, she was raised by an aunt and uncle.

“Pink is more than a color,” the senator stated. “It’s a call to arms, a mission for a lifetime.” She added that the “soaring, courageous spirit of Plato Academy Director Marianthi Koritsaris is consistent with Hellenic ideals and work ethic. They are emblematic of our ethos, to thrive as a community.”

Since early detection is vital to survival, the senator has worked across the aisle to bring legislation to advance these important initiatives. She’s worked with colleagues “to make yearly mammograms covered under Medicare.” Also, “some women were discharged within a few hours of getting a mastectomy, so we introduced legislation that insurance companies must allow a woman to stay in the hospital at least 48 hours following surgery.”

The evening also featured a discussion on diet and health and its connection to cancer, by oncologist Dr. Virginia Kaklamani, plus a moving story of survival by Pam Paziotopoulos Jann, Senior Advisor, Intimate Partner Violence and Stalking Prevention, Center for Personal Protection and Safety.

The event was organized through the board of directors of Plato Academy, a way of giving back to their very dedicated director,  Koritsaris, who is a breast cancer survivor. “While undergoing treatment and experiencing the side effects, Mari continued to go to work, because she didn’t want to let the students down,” said Eleni Zarkos Moutidis, the event chairperson.

Koritsaris recognized prominent Plato alumni in attendance, including the Honorable Charles Kocoras – a federal judge serving on the United States District Court for the Northern Illinois District – and noted businessman/philanthropist Chris Tomaras.  For her dedication to the cause, Snowe was awarded Plato’s “Heart of the School” award. “The event raised more than $25,000 and the donations are still coming in,” Zarkos Moutidis added. Proceeds benefit the Lynn Sage Cancer Center, The Maggie Daley Center for Women’s Cancer Care as well as Plato Academy.