GRNews
GreekReporter.comGreek News4th of July: Greek Influence on the Declaration of Independence

4th of July: Greek Influence on the Declaration of Independence 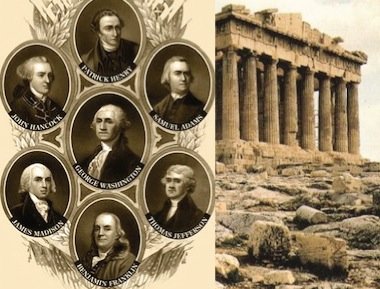 Ancient Greece has influenced the western world in a variety of aspects, but the most important element of our modern society, Democracy, was the key element to American Independence. In a speech delivered at the White House on March 9th, President Obama described that influence.

“And so it was that the democratic example of a small group of city states more than 2,000 years ago could inspire the founding generation of this country, that led one early American to imagine that “the days of Greece may be revived in the woods of America.”

“It’s the sense of nobility and morality written in the pages of those timeless Greek texts, which have instructed students — and tormented them — down the ages, in every corner of the world.”

All of the founding fathers had studied ancient Greek texts which drew inspiration about morals, ethics and the sense of independence.

Author Tom Jewett points out that “Jefferson admired many aspects of the ancient Greeks; he could read and speak the language. He agreed with many of their precepts, such as the Greek idea that man is measure of all things. This was the groundwork for his belief in humanism, which recognized no barriers to the use of the mind, and which sought to make all knowledge useful to man. Jefferson particularly admired the Greeks’ idea with respect to man’s relationship to himself”.

“Jefferson was also influenced by the Greek philosophies of Epicures and the Stoics. He believed as Epicures that happiness was humanity’s main goal and it could be attained through moral and noble actions. From the Stoics, Jefferson took the idea of reining in emotion. He felt these ideas about self-control, moderation and rational behavior in the face of misfortune were paragons on how one should comport oneself.”

Joe Wolverton, II writes that “George Wythe, the renowned Virginian who would come to be known as the “Teacher of Liberty,” was himself taught to appreciate the writings of the ancients at home by his mother. Tragically, Wythe’s mother died when he was very young, but she lived long enough to anchor her son’s education on very firm moorings.”

According to one early biographer, Wythe “had a perfect knowledge of the Greek language taught to him by his mother in the backwoods.”

John Adams would often use Greek words in his letters to Jefferson. He was also a great admirer of Xenophon.

Greek philosopher Polybius from Megalopolis, Arcadia had a great influence on the founding fathers. His political beliefs have had a continuous appeal to republican thinkers, from Cicero, to Charles de Montesquieu, to the Founding Fathers of the United States. Marshall Davies Lloyd has argued that Polybius influenced the Founding Fathers to implement the separation of powers as a form of government. LIoyd traced the origins of the theory of mixed constitution to antiquity and especially Polybius’ Histories, while underscoring similarities between Polybius’ system and that of the American Constitution.

“These men,” says Simmons, discussing the Philadelphia debates in 1787, “had read and digested Polybius, Aristotle, and Cicero, and they used the ancient luminaries to frame and illustrate their ideas before the assembly…These heated yet erudite debates, along with the Federalist Papers, fairly pullulate both with subtle classical allusions—with which Madison, Hamilton, and Jay assumed readers to be tolerably familiar—and direct references to the leagues—Amphictyonic, Achaean, Aetolian, Lycian—formed by the ancient Greeks in order to achieve political and physical security.”

On the 4th of July Greek-Americans have one more reason to celebrate the American independence, their Greek heritage.