GRNews
GreekReporter.comGreeceThe Largest Greek Salad In The World And A Tomato War In... 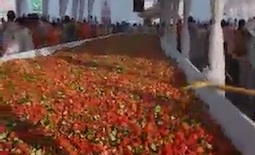 The people of Ierapetra are about to make the largest Greek Salad in the world, weighing more than 11 tons.
The event will also be accompanied by an unusual war with tomatoes instead of bullets and guns.
The tomato war and the attempt to break the Guinness world record of the largest salad in the world will take place at the end of June in Ierapetra in southern Crete.
Ierapetra will probably be included in the famous Book of Guinness Records due to the restoration of an old local custom, the tomato war, which reminds us the similar custom in the Spanish city of Bunol.
This is a rather hard task but the area is known for the massive production of fresh and ripe vegetables. The area is also known for its greenhouses, so the locals are determined to succeed in order to make the area even more known. officials from the area have already contacted the pertinent committee of the records in Greece in order to learn all the details needed for their task.
The president of the Welfare Organization of Ierapetra Mr Spyros Tsikaloudakis is expected to take over the responsibility of this task and organize the event, because the locals should find adequate quantities of tomato but also enough volunteers who will cut the ingredients within a few hours.
The day when the tomato salad will be prepared will also be the day of the tomato war in Ierapetra ; The tomato salad will be prepared at the seaside square of Ierapetra and the tomato war will take place in “Gra Lygia “ area.
The event of the creation of the largest tomato salad will take place on the 19th and 20th of June in Ierapetra, aiming at entering the Guinness Record book.