TechNews
GreekReporter.com Greece Castle of Fairy Tales in the Peloponnese

Castle of Fairy Tales in the Peloponnese 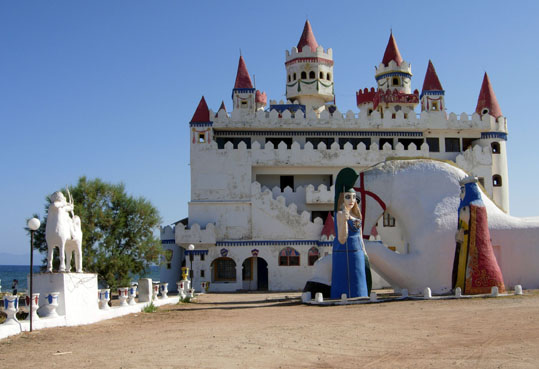 The municipality of Filiatra, located in Messinia Prefecture in the Peloponnese, southern Greece, has its own Eiffel Tower thousands of miles away from the original in Paris, France.
Haris Fournarakis, or Harry Fournier, returned to Filiatra from the US, where he had become a surgeon and made a fortune, in the 1960s and started to live out his fantasies. First he built the replica of the Eiffel Tower at one end of the town, then went on to build the Kastro ton Paramythion, the Castle of Fairytales, in his home town of Agrili, where he raised his family.
Filiatra is built on the westernmost tip of Messinia Prefecture, and a replica of the Eiffel Tower welcomes visitors at the northern entrance of the city.
The replica is 26 meters tall, much smaller in size than the original, and was built in the previous century by Dr. Harry Fournier (Fournarakis).
The Filiatra Eiffel Tower, which is illuminated at night, was restored by the municipality in 2007.

Greece recorded 1,784 coronavirus cases Thursday, out of the 50,247 Covid tests that were conducted in the country during the day.
Crime