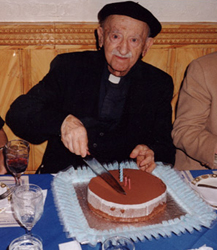 Ah the local canon fodder. We don’t know much about George Sotiropoulos (foto) except his name is difficult to spell and his padded record of 11-3 SU lifetime is padded with a bunch of no-namers. In the UFC, Sotiropoulos is 4-0 SU but has yet to fight on the main card. When he steps in to the octagon in his native Australia at UFC 110, he’ll get a rude awakening from one of the UFC’s biggest fan favorites.
The man known as Joe “Daddy” Stevenson is one of the busiest fighters in the industry. At just 27-years of age, he’s piled up a record of 31-10 SU and is coming off a two fight win streak. He is relentless in pursuit and loves to use his powerful legs to knock his opponents of center so he can attack with his polished wrestling game. In his career, Stevenson has ended 14 bouts by submission.
What has defined Sotiropoulos’s game has been his steady top control. Once there, he’s like a rodeo cowboy and looks for openings to end fights quickly once he mounts. The problem is that getting top control against a season veteran like Stevenson will be virtually impossible. A four fight winning streak and a home crowd behind him may give Sotiropoulos the edge in momentum, but more than likely it will force him to make adrenalin pumped mistakes at a hundred miles an hour.
If you enjoyed this article then get full access to all our other features plus a 50% bonus when you sign up with us by clicking on this link
Stevenson really needs to control this fight throughout, and he also must win decisively by submission or TKO. Letting his fights go to decision has been one of the main reasons that people don’t like Stevenson. It’s not like he wants them to, but he lacks the punching power and precision striking to really put someone on their ass.
Good thing for him that Sotiropoulos does as well.
Lightweight fights usually end up being solid punch-fests, but both of these guys will try to win this fight on the mat. Sotiropoulos may believe that he honestly belongs in the ring with top flight contenders, but Stevenson will prove him wrong and George will be left searching for answers when Stevenson serves him a lesson on the ground. After that, this fight will be Stevenson’s to control and he’ll go for the knockout just for the thrill.

It was on this day, February 26, one year ago that the first case of coronavirus was confirmed and officially announced in Greece.
Food