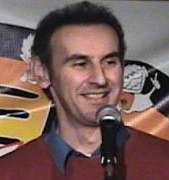 Comedian, actor and writer, Jim Dailakis is a Greek-Australian triple threat based in New York. The son of Greek immigrants  grew up in Perth, Australia watching classic American sitcoms like “All in the Family” and “M*A*S*H.” A Trained actor at Lee Strasberg Theatre and Film Institute and the Actors Studio in New York City; he also does voice-over and commercial work. He has four original screenplays coming about, including “Not Until She Sings,” a comedy-drama.
Jim Dailakis has performed at many of the nation’s best comedy venues such as New York City’s Caroline’s and Laugh Factory, Atlantic City’s Borgata Hotel, Raleigh’s Charlie Goodnight’s, Jacksonville’s Comedy Zone and Chicago’s Riddles.
Presently, Dailakis tickeles audiences in  a three-night stand-up comedy show Thursday at the Funny Bone Station Square on the South Side in Pittsburg.
He is a master of accents and can take on any character. You can spot him doing dead-on imitations of Dustin Hoffman, Sean Connery, Harrison Ford, and Seinfeld’s Kramer in his acts. Audiences are so pleased with Dailakis’ acts that his original plan for a three-month comedy tour in the States has turned into an indefinite stay.