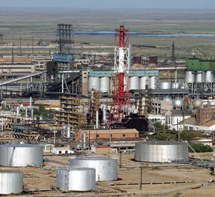 Deputy Environment, Energy and Climatic Change Minister Yiannis Maniatis and Bulgarian Economy, Energy and Tourism Minister Traicho Traikov discussed important cooperation issues between Greece and Bulgaria on Thursday in the strategic sector of energy, in a meeting held in the framework of the two-day international forum on energy cooperation between Black Sea countries that took place here.
“I raised the issues of the Burgas-Alexandroupoli oil pipeline and the need for us to speed up procedures, to proceed speedily, the various problems to be solved and, mainly, the economic funding to the international company, that exists on the part of Bulgaria,” Maniatis said in reply to a queston by the ANA-MPA.
It is reminded that in recent statements regarding the pending payment of dues for the international construction company of the Burgas-Alexandroupoli oil pipeline (that Bulgaria has to jointly fund with five million euros, as is anticipated by relevant agreements between Sofia, Athens and Moscow), Bulgarian Prime Minister Boyko Borisov said that the country will pay the relevant funds to the international company, when the circumstances will permit this, invoking the economic difficulties of the budget.
“Mr. Traikov informed us that the issue has been undertaken by the vice president of the government and Finance Minister and very soon the issue will be solved, very soon. On my part, I expressed Greece’s desire for us to proceed very quickly and wherever problems exist to help them to be overcome,” Maniatis added.
Speaking at a press conference after the talks and asked whether Bulgaria has found the money for the joint funding of the international construction company of the Burgas-Alexandroupoli oil pipeline, Traikov expressed his country’s will to meet all the international commitments that it has undertaken, including the problem in question, which falls under the competence of the Economy Ministry.
Responding to a question by the ANA-MPA on the progress of the study on the environmental repercussions of the Burgas-Alexandroupoli pipeline, which was initiated recently by the relevant Bulgarian ministry, Traikov expressed the conviction that the study will take place with all the seriousness and responsiblity required by the project, without referring to the timetable for its completion.
Maniatis also announced after meeting Traikov that a joint working group between Greek and Bulgarian officials will tend to the immediate construction of the pipeline that will link Bulgaria’s natural gas network with the Greece-Italy pipeline.
Maniatis stressed that through a coordinateed effort by the relevant ministers of Greece, Italy and Bulgaria, European funding amounting to 45 million euros was secured for the linking of the network of Bulgaria with the Greek-Italian pipeline, in the framework of the European Union’s Reconstruction Plan.
He added that a relevant agreement had been signed by the interested agencies of the three countries last summer in Sofia and stressed the need for the high momentum of the project’s progress to be maintained.

The Greek War of Independence had many heroes. The first names that come to mind are: Kolokotronis, Karaiskakis, Papaflessas, Bouboulina, Diakos, Kanaris
Education