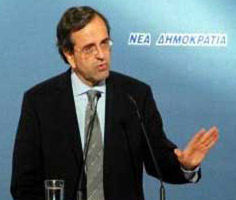 Antonis Samaras is the new leader of main opposition New Democracy (ND) party, after winning an absolute majority from the first round of the election on Sunday, it was announced in the early hours of Monday.
Samaras, who was culture minister in the preceding ND government, is New Democracy’s seventh president, succeeding former prime minister Costas Karamanlis, who announced his resignation from the party helm after ND’s crushing defeat in the October 4 general elections, that brought the Panhellenic Socialist Movement (PASOK) to power.
Samaras’ victory was announced shortly after 4:00 a.m. by election supervisory committee chairman Dimitris Sioufas, as the tally of 72.68 percent of the election stations set up throughout the country, representing nearly 550,000 voters, showed 50.18 percent of the vote in favor of Samaras, against 38.76 percent for former foreign minister Dora Bakoyannis and 10.06 percent for the third candidate, Thessaloniki prefect Panagiotis Psomiadis.

Samaras’ prevalence with an absolute majority was irreversible, while Sioufas said that his percentage was expected to increase when all the votes are tallied.
A total of 1,039 voting stations were set up throughout the country, while 64 voting stations were set up in other European countries.
Voting began at 7:00 a.m. Sunday and were due to close at 7:00 in the evening, but a glitch in the on-line system for several hours, due to a software problem, and an unexpectedly large turnout of voters obliged the supervisory committee to extend the closing time to 9:30 p.m.
This is the first time that the ND president was elected by the party’s grass roots, after voting was extended to all registered party members through an amendment of the New Democracy Charter.
In early morning statements after his victory was clinched, Samaras said that it was an honor for him to take on the responsibility of leading the party in new struggles for the progress of the Greek people, and chiefly for the young generation’s right to hope, and for the party’s return to new victories.

“A month and a half ago, in difficult times, I spoke to you of hope, and you received the message of hope and turned it into a big, unprecedented, peaceful and democratic revolution. I asked you to turn the streams into a river, and you created a veritable sea that swept away everything that was holding us back, that was taking us back and hurting us. The participation in the election process, despite all the problems that are natural in such an unprecedented overture to the grass roots, exceeded all expectations. A new era begins now for our democracy, and also for New Democracy. Today, we are all winners. There are no losers. We were not opponents all this time. I said this during the difficult hours of the campaign race, and a say it again today. There are no opponents from here on,” he added.
Samaras noted that he will speak with fellow candidate Bakoyannis on Monday, adding that he truly thanked her for her congratulatory phone call, and with Psomiadis, whom he wished a speedy recovery, as the third candidate was diagnosed with pneumonia late Sunday, as well as with Karamanlis “with whom we will be together in all the big battles ahead”.
The new ND leader pledged to safeguard the party’s unity, noting that he did not care who they voted for and that everything said up to then has been forgotten. “We will be all together. Nothing separates us now, but we are united by the major challenges of the future,” he added.
(source: ana-mpa)