Innovative NY Stylist on the Rise 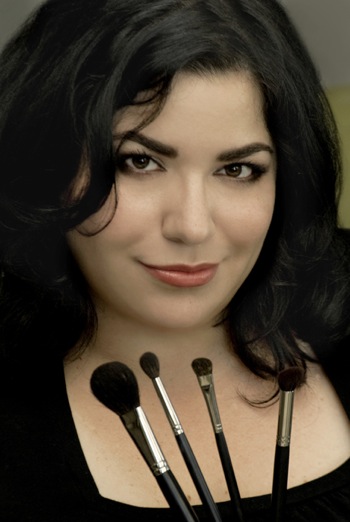 Being creative and developing new concepts are the staples in the fashion and beauty industry. One such individual has harnessed these properties and capitalized on them. Artemis’ interest began in college after she taught herself character makeup for a production of The Crucible. She went on to play two characters, Harriet Putnam in Act I & Sara Goode in Act IV and also volunteered to learn how to create the character makeup.

“I fell in love with the creative process, as I believed that it was an extension of all the other creative things I had always involved myself in. I paint, write poetry, sing, and so forth.”

She soon graduated to working with up and commers and celebrities from overseas, like Charlotte Dawson, Annet Artani & Madelin Zero. Artemis derives her inspiration from nature itself. For example a flower, barbed wire, rain, a pattern or even something as simple as a smile.

“I have worked with Annet Artani. She is a singer-songwriter from New York, who is very well known in Greece, and will be releasing an American album shortly. She also happens to be my kid sister.”

When it comes to how women desire to express themselves Artemis believes that women today want to find what looks best on them. When someone asks for a makeup lesson from her they wish to learn how to look their best. There are always women who love to experiment with color and then there are those who are more timid and prefer more natural tones. According to Artemis makeup is an accessory and it is meant to enhance your features so that you look your beautiful best.

“I also find that the most experimental time for beauty is when you are in your teens and early twenties.  After this, life changes and you realize that less is more.  You can tell a woman’s age if she is still doing her makeup & hair in the same style she wore in her youth! You look much more youthful and fresh if you are updated, yet classic!”

Presently, Artemis is working on makeup for photo-shoots, fashion shows and specific events. So there is something new coming up all the time. For her, this is one of the most exciting parts of her career as a freelancer. On the horizon she will be on the Janice

Dickinson Modeling Agency Show on Oxygen at the end of their season. She was on screen working on a shoot for the show. It aired on October 14th.

Artemis has worked with all types of people.  Hairstyling was something she had no intention of working on.  She did not think that she would like to create hairstyles but someone mentioned that she would be able to attract more work. Artemis began to dabble in it right away, fell in love with it, and now she is often hired to style hair alone.

She also admits that her ethnic upbringing had contributed to her success and love for all things beautiful. “Definitely yes! Greek-Americans have this innate desire to create their own success. Greek Americans of my parent’s generation came with little to nothing in their pockets and created businesses that allowed them to buy homes, educate their children, and live comfortably in the United States. They are the realization of the American dream. I come from a community of entrepreneurs.”

Artemis also being a curvy woman herself always admired the beautiful models of the plus industry. Hence she was approached by Plus Model Magazine to be an editor. She was shooting a lingerie editorial for the magazine when the editor asked her if she would be interested in becoming their beauty editor. It turned out they wanted to add a beauty section to their magazine.

“I jumped at the opportunity because other than making faces, I write, and I was very excited about being able to write about beauty! I also love that I have the chance to reach an audience through an outlet that promotes a positive self-image.”

When it comes to achieving her families support it was always a balancing act. The time Artemis made the comment that she wanted to pursue this field after college her family was not for it.

” I had wanted to do this is after college, I was talked out of it.  “We did not send you to college to sell lipstick!” was what I was told.”

Artemis then not mature enough to realize the obvious pursued a different career as a school teacher. Her parents own fears inhibited their ability to comprehend what was possible beyond a hair salon. Then the time came that all concerned realized that Artemis was not happy what she was doing. At that point her family shifted gears and had no choice but support her move.

“When we all realized how unhappy and frustrated I was at being a teacher, I think that they had no choice but to support my decision.  My husband, however, was able to support me whole-heartedly, from the get-go. He was able to see my vision and is still my greatest cheerleader!”

Artemis looks forward to further projects to make everyone look their best.  To view her work visit  www.makeupbyartemis.com .